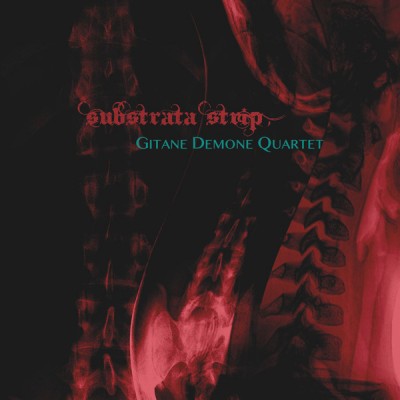 New release by the L.A. based GITANE DEMONE QUARTET, feat Rikk Agnew (Adolescents, Christian Death), Paul Roessler (Screamers, 45 Grave), Deb Venom (A Bleeding Sky) and led by the breathtaking GITANE DEMONE (Christian Death, Rozz Williams). With this new release, Gitane DeMone Quartet delves deeper into the sonic world of its creation from its first album, Past the Sun, continuing to pull away the layers of artifice and pretense to get at the raw truth within. From the tragedy of "Douglas Street" to the haunting "Bells for Barbara," the lush beauty of "Amaranthene" to the cosmic experimentation of "Retrospekt" (an arrangement of a classic Sun Ra piece), SUBSTRATA STRIP shows the band maturing and reaching into newer, more complicated realms while losing none of its visceral impact. The sound of choppers passing overhead. Death from above? Maybe. But if you're lucky, it's the opening of "Douglas Street," the opening track of Gitane DeMone Quartet's new album, Substrata Strip. "Douglas Street" plunges headlong into the darkness of a drive-by shooting that took place not far from where the band lives. It's a dark start to a journey that resonates with the sounds of life and death, of love and loss, of rage and rebirth. "Amaranthene" (the unexpected standout track on this album) sees the band at its most accessible yet, even flirting (however slightly) with the girl-group sound of the '60s, but with DeMone's inimitable lyric and vocal spin providing a kaleidoscope of emotions never dreamt of by that era's sirens. Those who have had the unique pleasure of seeing Gitane DeMone Quartet live , know that the sheer power, that this ensemble unleashes onstage, cannot possibly be harnessed onto disc. But through the visionary brilliance of keyboardist and producer Paul Roessler, Substrata Strip is as close as it gets. Let it into your guts ... because for better or worse, you deserve it.

A review by REGEN-Magazine (USA):

"GDQ returns with an amazing sophomore effort that proves they are more than a supergroup in name only. Gitane Demone Quartet hasn’t wasted much time between the debut album, Past the Sun, and the follow-up album, Substrata Strip, but the band has grown as a unit by leaps and bounds. The music here feels much warmer and more purposeful. Just listen to the lead track, “Douglas Street,” with its emotive lyrics seeming more like a news report than a stock ‘song’ – it builds and builds from the effects of the helicopter overtop of Paul Roessler’s keyboard trumpet sounds that herald the coming announcement by Demone, “There is a death on Douglas Street, down at the bottom of the hill.” Rikk Agnew and Deb Venom’s guitar and bass buzz behind her voice, the tension building so slowly as she continues to unfold the scene. The lyrics end with one final, bone chilling howl of, “How do you rest in peace?” and the music is so tense, you could slice it with your finger. One would expect the song to erupt into a loud cacophony of anger and grit, but instead, it slides into a very silky, jazzy end with Agnew’s guitar sounding siren like, giving a very peaceful resolution to what you would think should be a very grinding outro. And this is only the first track!

“Amarathene” is as fine a song as you will likely hear, a track that demands attention as its gorgeous melody sways the listener into Demone’s elegant delivery of a song so full of passion. The instrumentation is so delicate and understated until close to the end of the track when Agnew’s guitar breaks through like barbed wire to add a little blood to the wine. This is absolutely, in this writer’s opinion, a contender for song of the year and it would make an impressive single for the band. Clocking in at almost 13 minutes is a cover of Sun Ra’s “Retrospekt,” which takes full ad- vantage of everyone’s talent within this ensemble as they interplay seamlessly. The band has a chance to shine in this freeform realm – no acid required to enjoy this trip. “Prayer for Peace” wraps everything up with as much tension as the album opener, but instead of senseless tragic circumstance, it is a palpable pleading for love. The music is pounded out in a very tribal rhythm to let Demone’s angelic benediction ring loud and clear for all to bear witness and feel. Substrata Strip strikes hard down to the bone as its intensity fills every single second. There is no filler at all here; each track is replete with such unbelievable musicality that you will not help but have a physical reaction to some note or phrase. Time has not diminished Demone’s voice either as more than a few passages raised the hair on the back of my neck for either the sheer ferocity she is able to unleash or the honey drenched gentleness. Rikk Agnew is a revelation as well here; if you only know the harder edge goth/punk side of him, wait until your ears embrace the texture and color that he adds. One can tell that so much love went into making this record, and we can only hope there is much more to come."