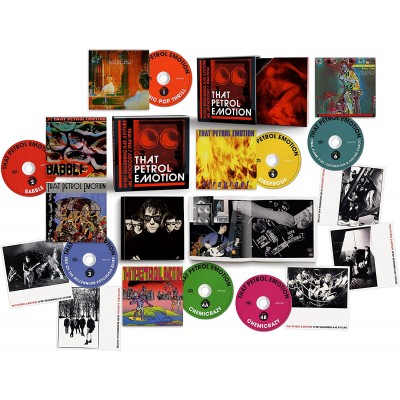 Originally a Northern Irish, London based quintet with an American singer, the band got together following the demise of Top 40 hitmakers and John Peel favourites The Undertones, their name inspired by the title of a song by another Derry outfit, Bam Bam & The Calling.

Too late for Punk, too early for Grunge, That Petrol Emotion’s output merged well-written melodic tunes with political statement. Sleeve artwork became informative newsletters. Singles and albums received rapturous reviews, gigs were sold-out joyous affairs. Later recordings bought in elements of hip-hop and Celtic folk. The band were always difficult to categorise and impossible to load onto a bandwagon, although no one could accuse the band of dabbling. As this collection shows, across the course of their ten years together, the quality of their songwriting never let up.

“Their music is in a constant, latently violent, state of flux, sometimes overloaded, sometimes taut and splintered: a different kind of tension. For That Petrol Emotion, pop music is certainly not enough…They want to burn, to beat out a music that redefines itself, extends the boundaries.”

The choice of the word ‘burn’ in Sean O’Hagan’s piece for the NME is a common theme in articles about That Petrol Emotion. Words like ‘incendiary’ and ‘subversive’ were often bandied about, although that key phrase ‘pop music’ is equally if not more important.

And it has been said you can judge a band by their choice of cover versions – within these seven discs are the band’s take on songs by Captain Beefheart, Pere Ubu, War, Hamilton Bohannon, Can, Neil Young, The Beatles, The Membranes, Leonard Cohen and Iggy Pop.

Perhaps the most extraordinary fact about That Petrol Emotion is no one has seen fit to compile all or some of their works – that is until now. With full co-operation from the band, this comprehensive 121 track 7 CD collection brings together all five of their studio albums plus a typically energy-packed live recording from May 1994. It celebrates a body of work that has stood the test of time and – all these years later – undoubtedly still deserves a wider audience.

121 original tracks across a 7 CD set, featuring all five studio albums and one live album Includes non-album B-sides, bonus tracks, remixes, live recordings and fan club only releases Curated by the band, who also supplied rare images and memorabilia for inclusion in the book 52-page colour book with new sleeve notes from respected author John Harris The first ever compilation celebrating ten years of this influential and creative tour-de-force- T