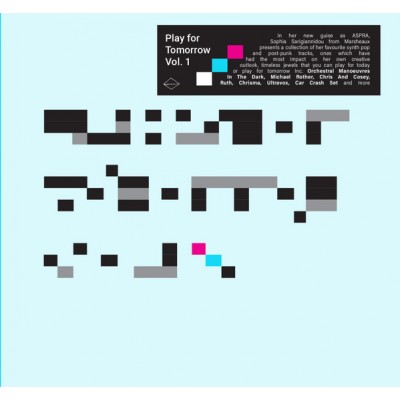 Collection with rare and obscure post punk and minimal synth pop tracks from 1977-1985.

The Gadgets “U.F.O. Report No.1” :A slow sad melody with blurry vocals reminding the best traditions of the synth pop underground, inspired by the dark sides of David Bowie. Their members were Colin Lloyd-Tucker, John Hyde and a young Matt Johnson before his The The project.

Michael Rother “Karussell”: Neu!’s mastermind, Michael Rother on his first solo album created a blueprint for the synth pop generation just two years before the electro pop phenomenon conquered the british charts. In this motorik instrumental, you can hear the roots of OMD sound.

Amin Peck “Love Disgrace”: A hidden gem from the glorious 80’s obscurities Amin Peck (Leonard Parker and George Fyron) with new romantic glimpses and a sense of dark danger in the background. Amin Peck released just four singles between 1982 and 1984.

Alan Burnham - Music To Save The World By: There is not plenty of info for this Alan Burnham’s masterpiece. Actually, there is no available info about the identity of Alan Burnham. Some say he is the alter ego of Daniel Miller – the producer of this fine obscurity.

Blaine Reininger “Mystery And Confusion”: This is the ultimate masterpiece of the new romantic era, a song that encapsulates the spirit and the drive of the electronic pop times when Eurocentricity was the one and only path for the modern creativity of pop musicians.

Orchestral Manoeuvres In The Dark “Of All The Things We've Made”: The b-side of “Maid Of Orleans” single is a very sensitive, almost fragile affair. The song has a strong Kraftwerk’s influence and a futuristic feel that enriched all of the duet’s creativity in 1982. Andy McCluskey still is one of the most enduring stars of the electro pop scene.

Ruth “Polaroid Roman Photo”: French electro scene always surprises me, there is always spectacular material to be explored, like this great single from the mid-80s. Ruth Ellyeri and Thierry Müller built a dead sexy tune with q and a vocals and a steady beat to be obsessed with.

Buggles “On TV” :Adventures In Modern Recording was the perfect title for the second album of the Trevor Horn and Geoff Downes duo where this excellent single is included, a glimpse to the futuristic world ahead through a tv screen.

Electronic Circus “Direct Lines”: Just one single was recorded from this combo, a project of Gary Numan’s Tubeway Army keyboardist, Chris Payne. Penny Heathcote, a singer of the new wave band The Corvettes sings with all the naivety of the early 80s.

I Start Counting “Still Smiling”: This was the second single of London’s I Start Counting, a duo comprised of David Baker and Simon Leonard that kept on recording fine electronic pop music, produced by Daniel Miller himself.

Chris & Cosey “October (Love Song)”: A historic duo, the one half of Throbbing Gristle started recording their own material in the early 80s and this bright slice of synth pop with the sunshiny pop vocals of Cosey Fanni Tutti wrapped with an air of hidden secrets.

Ultravox “Just For A Moment”: Ultravox’s third album closed with this John Foxx’s sad melody, a track that ended the first chapter of the glorious English band. Then Midge Ure joined them. The melancholy in John Foxx’s Voice is so expressive with a hint of bitterness.