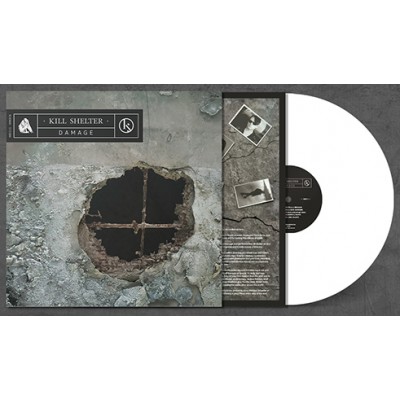 First released in Digipak by Unknown Pleasures in 2018, this highly praised album is now available on WHITE coloured Vinyl, limited to 500 on Manic Depression. The Vinyl comes with printed Inlay-card KILL SHELTER has brought together a host of underground talent from around the globe to feature on his debut album “Damage” on Unknown Pleasures Records. This unique recording features vocal contributions and collaborations with Hante. (F), Buzz Kull (AUS), Delphine Coma (US), Antipole (N), undertheskin (PL), Killjoi (US), The Shyness of Strangers (CDN), Pedro Code (Iamtheshadow - P), Nate Jespersen (ultraviolence - CDN), New Haunts (UK) and Bragolin (NL). The album was mastered by Eric Van Wonterghem at Prodam-Berlin (D). All the tracks on “Damage” are themed around the physical and psychological hurt that we cause to ourselves, others and the world around us. The themes are dark, dystopian, melan- cholic, introspective and, at times, deeply disturbing.

B1 Get down [feat. The Shyness of Strangers] B2 No Regrets [feat. undertheskin] B3 Bodies [feat. Buzz Kull] B4 Hollow [feat. Pedro Code] B5 The Happening [feat. Killjoi]