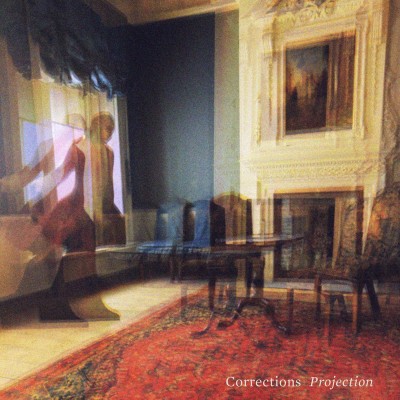 Corrections is the self-appointed moniker for London based singer-songwriter Sam Nicholas – a name born from both playful hybris and a reference to his life as a teacher, assessing individuals for a living. Projection marks the arrival of the artist as a young man. One could even be fooled into believing Corrections to be a band.

While his first two LPs have fallen somewhere vaguely in the realms of lo-fi bedroom shoegaze and post-punk, its precise location has been difficult to pin down. Projection is an impulsive and bombastic sidestep. Cacophonous, jittering synth work has replaced the predominant jangle-pop stylings of his early work, creating an atmosphere at once denser and subsequently louder than the low-key rattle + hum of his initial demos. Field recordings lurk in the background and tasteful reverb acts as more than ‘the cherry on top’, subverting genre norms, allowing the darkness to shine in the foreground, rather than remain locked in an alcove.

Indeed, his relocation to East London is reflected in tracks like R4TS and Dark of the Pillow, which invoke the energy and dark potential of one of the world’s most bustling metropolises. Pulsating, metronomic percussion works only to strengthen the sonic backbone of gnarly, Interpol-esque guitar work. Sam’s unique vocal stylings have at last found a place to hide; nestled in the sunlight, firmly in the realm of post-punk music grounded firmly in the realm of pure aesthetics.