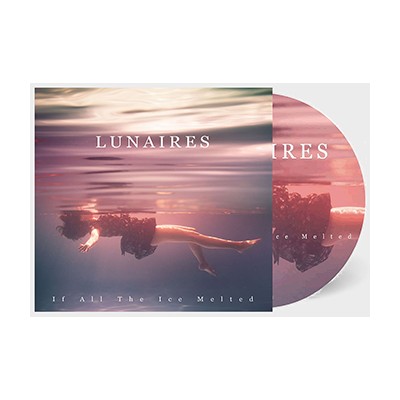 Lunaires is the new project by Danilo Carnevale and Patrizia Tranchina, ex-members of Jeunesse d'Ivoire, one of the most legendary Italian Wave acts, active from the early through mid-Eighties! The group reformed as Ivories in 2010 and, after recording and touring extensively, disbanded in 2016.

Lunaires’ debut LP is the result of a demanding two-year period where both members were facing family loss in different ways. It’s an emotional album about challenging struggles and definitive departures– and how to live with them.

Documented in compelling songs, The LP is an eyewitness account of losing battles with mortality and the small changes beginning healing process. Yet the charm, however dark, of “If all the Ice melted” is in raising questions - in the subtle, elegiac lift featured in most songs. From the goth influenced, mournful opening ‘Unbound’, through the upbeat bittersweet electronica meets Dream-pop of ‘Spring Waiting Still’, to the closing mix between shoegaze and new-wave of ‘Into the Deep End’, the moods shift between shades and light, dealing with total physical erosion, facing the ruthlessness of Nature and the quest for meaning. Through the whole album there’s no hiding in emotional distance.

Lunaires is the landing point of a long musical journey which embodies and testifies two very distant and still related musical eras, that of the crudest and most innocent post-punk of thirty years ago and today electronica, bordering on psychedelia, shoegaze and krautrock. Having experienced the beginnings of post-punk in real time as forerunners allows Lunaires a long look and a musical richness not easily found in contemporary bands.