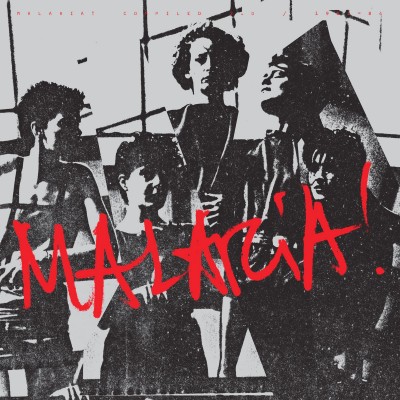 New-wave group Malaria! have their Compiled 1981-1984 LP reissued on Moabit Musik. This new edition bulks out the sixteen tracks of Compiled’s first run with four other tunes. Containing their 1982 debut LP Emotion, debut single, early EPs and some assorted other cuts, Compiled runs the gauntlet of early 80’s post-punk styles from a group who used to run with Einstürzende Neubauten. Gudrun Gut got her start in Malaria! you know.

Malaria! started touring intensively soon after the release of their 12”, commencing with a concert with New Order at Brussel’s Ancienne Belgique, and going on from there to concerts with Siouxsie and the Banshees, Birthday Party, The Slits, The AuPairs, Raincoats, Nina Hagen, John Cale, Einstuerzende Neubauten. They played venues as diverse as the Mudd Club, Peppermint Lounge and Studio 54 in New York, the Documenta in Kassel, the Bat Cave in London, Les Bains Douche in Paris, Milky Way and Paradiso in Amsterdam, ICA in London, the Piazza Santa Maria Novella in Florence and Markthalle in Hamburg and naturally, again and again, at the SO36 in Berlin.

While touring, Malaria! used their time off to record in Studios in New York, London, Brussels, New Orleans, and in Berlin (How Do You Like My New Dog? 7”, Weisses Wasser 12”, New York Passage 12”, Revisited MC, Emotion Album). At the BBC studios in London Maida Vale Malaria recorded an Kit Jensen and a John Peel Session.

Malaria! took a break in 1984 - Bettina and Christine re-located to New York, and Gudrun and Manon stayed in Berlin to form, with Beate Bartel, Matador, but not before they recorded their Mini-Album, Beat the Distance. 1992 Gudrun, Bettina, Christine, and Manon met up in New Orleans with Jim Thirlwell (Foetus) to record Elation 12”. Elation was followed by Cheerio, Album, which again was recorded in Berlin.

Chicks on Speed did their own version of Malaria’s song, Kaltes Klares Wasser in 2001, and the Remix went into the German Top 10.

Malaria has been an instrumental part of Berlin Music History, as recently presented at the „Zurück zum Beton“ at Düsseldorf’s Kunstakademie, Kunsthalle Wien „Punk!“, „Geniale Dilletanten“ Goethe Institut, and in B-Movie.

BIBA KOPF 2019: The theme song for that great German road movie yet to be made, Malaria!’s 1981 single “How Do You Like My New Dog?” etched the E into the motion music of their soon-come debut album Emotion with its trail-out line “Immer vorwärts, nie zurück...”. Always forward, never back: from West Berlin to London, Paris, New York and Tokyo... from here, there and everywhere to eternity, the Autobahn goes on forever, with Malaria! at the wheel, spinning new moves from timelines crossed in records and songs right on the money evoking Zarah Leander, fighting the power, staring down Death, and a whole lot more. In all, one merry hell of a ride, and on the evidence of Compiled 2.0, it’s not over yet.

MARK REEDER 2019: "Even today, their originality in everything from sound to style, has proven just how relevant Malaria! are. In my opinion, their music has stood the test of time. To me, Emotion sounds as good today as it did when it was first released and it was a pleasure to revisit it. They might not have had any zillion selling albums, and their image might have been copied, while their sound could never be. They remain exclusively unique and their influence and legacy will reach far into the future. This band is both an inspiration and a statement and they prove what five very creative girls can achieve, if given the right support to allow them to evolve, and it is exactly that, which has made Malaria! Germany’s most successful and renowned, all-girl band...“

DIEDRICH DIEDERICHSEN 1991: "...Malaria! put across so many clear, manifest, attractive, certain, muscular, and harsh symbols, just as they refused - defying the customs intrinsic to these symbols and the worlds in which they circulate - to weave all these things into a readable, reproducible and manageable, generic text..."