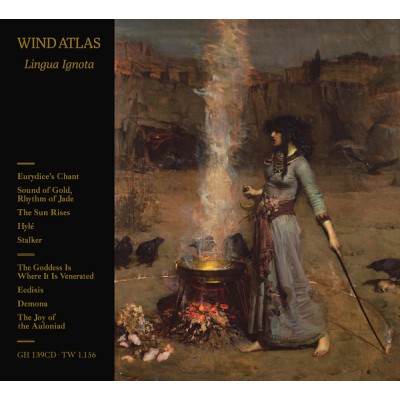 Wind Atlas’ music has gained in nuances, drifting smoothly from dark dream-pop and new-wave passages (calling in mind the beauty of Dead Can Dance) to gloomy postpunk atmospheres, similar to those of Crispy Ambulance, Durruti Column or In Camera. Music to think of an unknown continent, to look for the lost alchemical formula, to eventually Discover… Music that requires to do nothing but listen, a task that nowadays appears almost impossible. The message is conveyed in an imagined language from a terra incognita, the lingua ignota. Each song is like an accent or a period, like a comma, a verse, a whole chapter of a liturgical chant. Gibberish for those who relish the best soundtrack by Basil Poledouris and the 4AD catalogue. “Lingua Ignota” was recorded in Estudio Brazil (Madrid) with Javier Ortiz.

A review: “Wind Atlas sound a bit like Sioux Sioux after the Banshees broke up, if she had gone in a more interesting direction. Or maybe if Peter Murphy had started a project with Sioux Sioux? Something like that. Truth is, it doesn’t matter once those early Edge/Chameleons guitars, full of melodic urgency despite their simplicity, hit: the ritualistic feel of the backing turns up their immediacy even more, to the point where the whole composition seems to depend on them!”