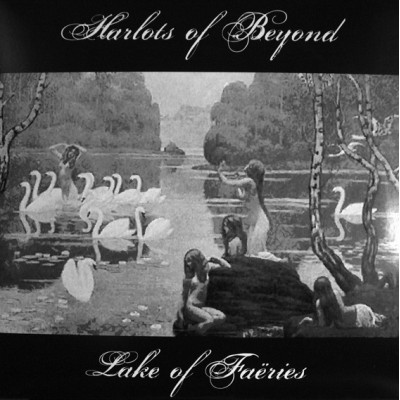 HARLOTS OF BEYOND - LAKE OF FAËRIES LP

It's intresting how a piece of music can make you think of a particular period in your life.How your memory works. When I first put on this CD,I felt like I was transformed back to my teens. It also made me think of The Doors and Sex Pistols.This band is not a new comer;they've been playing since the early 80's. I was curious to see how singing about faeries would feel like from a dark hearted band. It's not one of those new age CDs for sure. Influenced by a great mixture of styles from punk to opera,you certainly get an intresting sound as you listen to the tracks."Lake Of Faeries" has been produced by Bazie (from 69 Eyes). Like the CD cover shows,the world they create is the image of faeries living a black and white life near the lake. It's punkish, it's magical, it's sweet,and it's naughty and unusual indeed.

TRACKS A: A1 Masquerade Of Faceless A2 Castillo De Naipes A3 Blue Angel A4 Lake Of Faëries Producer – Bazie A5 L'Escalier Du Paradis

TRACKS B: B1 Underdogs Of Society B2 Harlot's House B3 Sabre-Toothed Squirrel B4 Midget Throwing Contest B5 Midsummer's Night