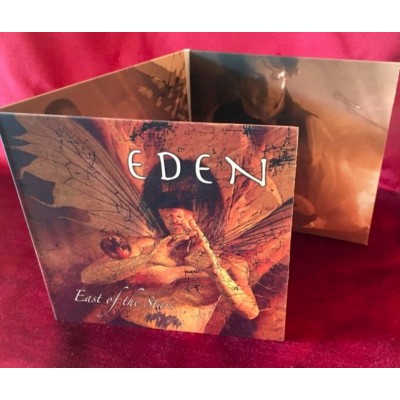 Limited edition of strictly 400 copies, of which only 250 for Europe!.

In 6-panel eco-digifile For fans of: Slowdive, Lycia, Love Spiral Downwards, The Church, The Chameleons and current Dark Wave acts such as Winter Severity Index, Second Still, Box and the Twins…

Dark Vinyl records are delighted to announce the release of EDEN’s new full-length album, recorded in the atmospherically rich nineteenth century ambience of Fryerstown Hall and produced at Horizon and Toyland Studios, Melbourne, Australia. EDEN is a Darkwave band that was formed in Melbourne, Australia in 1988 by singer-song- writer Sean Bowley and has long been known for spanning Darkwave, neo-Psychedelic and Gothic genres. "East of the Stars“ features the renown baritone vocal of Sean Bowley, the duelling ethereal guitars of Sean Bowley and Anthony Cornish as well as haunting keyboards and reverb laden drums. The Album celebrates the 30th anniversary of EDEN’s first release ("The Light Between Worlds" in 1990) and contains all new recordings of EDEN material (classic and rare material from EDEN’s legacy and new tracks written and recorded in 2019). The band looks back on 5 highly regarded albums on such acclaimed labels as Third Mind, Hyperium, Projekt, Nightshift UK….