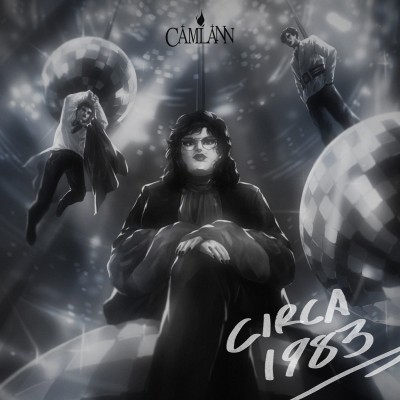 Camlann was firstly recognized and created a buzz in the darker music scene after the release of their debut album, "The Forgotten Lost Fragments" last July. Not long after that, the trio started to expand their sound more by experimenting several elements from various different genres – the result is this their second album, feat. 10 heart-pounding tracks, combining pain and melan- cholia with fun and nostalgia. With strong elements of early 80's Dark Disco and Synth-Pop that are wrapped in a modern Darkwave twist, "Circa 1983", is ready to bring you to Camlann's own interpretation of the early 1980's. "Circa 1983", takes influences from the early 80s, where the dark and classy electronic music took place: Depeche Mode and Soft Cell, for example. You can clearly listen hints to those bands as you go on and on over, “Circa 1983”.

They also take influences from Classic Disco and New Wave/Synthpop acts from the early 80's, and in certain songs you get reminded of New Order, Alphaphile, or even Donna Summer. Although, "Circa 1983", is dominated by dark disco and electropop sounds, the central track of the album, “Give Me Light", is a big surprise and quite different from the majority of the other songs. The darkest track on this album, maybe even the darkest song Camlann ever made! It has thick modern Darkwave and Dark Post-Punk elements to it, and the theme of dark catho- licism in this song also adds to the gloom of the song.

"Circa 1983" is an outstanding album: bleeky, melancholic, and nostalgic but also fun, modern, and full of hope. Camlann's statement to the world – bringing you their own version of modern nostalgia.