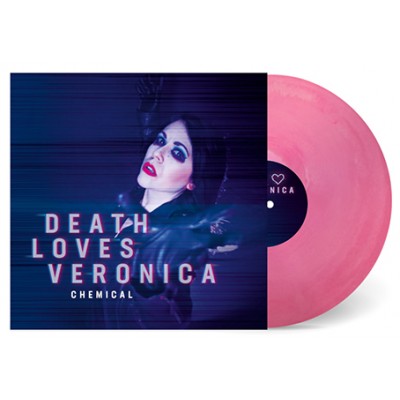 “Chemical”, the new album by Death Loves Veronica, is a perverse, dark-electronic journey infused with themes of nihilism, inhibition, and deception. Heavily saturated with post-industrial and gothic influences, this album is a corruption of the expected and resonates with the disillusion of our times. Recorded with analog synths and minimal guitar work, Chemical is a daring undertaking for solo artist Veronica Campbell.

Veronica recorded the framework of this album within a two-week time period while in recovery from an intensive health-related surgery. With limited use of her arms, she dove into the more technical capabilities of her favorite synthesizers, obsessively crafting each sound and, as usual, keeping her distance from the use of MIDI. The album’s title is as a reminder of what collectively fuels the human race—and what can increase or dull our pain. This album tells a dark story. It is driven and propelled from someplace deviant within, an expression of the artist’s true self.

Veronica is the creator, composer, and vocalist of electro/darkwave/post-punk, and at times post- industrial, solo project DEATH LOVES VERONICA. Her first demo album, Vampiros Electric (2018), was widely described as a cold wave-minimalist sound created with a variety of synth work and distinctly clean vocals.

A collection of her works has been released on European label Swiss Dark Nights entitled, Three Acts, shortly after followed by last year’s album “Lucid Dreams”. Veronica has been vocal about the importance of addressing mental health issues and is in treat- ment for neurological conditions such as Obsessive Compulsive Disorder (OCD), Sensory Processing Disorder (SPD), and Chronic Migraines. She urges people to embrace their differ- ences and to seek help when available. Veronica has composed music and played several in- struments since childhood which helped her to cope with sensory issues, learning disabilities, and childhood abuse.