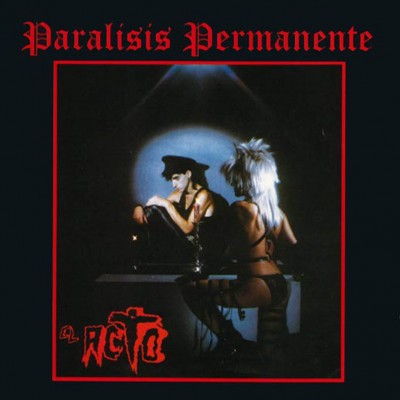 Parálisis Permanente was formed in 1981 by Eduardo Benavente and Nacho Canut, at the time members of the legendary Alaska y Los Pegamoides, one the first post-punks bands from the renowned Movida madrileña scene to achieve a relevant degree of success.

After two EPs and a few changes in the line-up, Benavente became the natural leader of the band, joined by Johnny Canut, Ana Curra (also an ex-Pegamoide) and Rafa Balmaseda (ex-Glutamato Ye-Yé). They recorded “El acto” in 1982 and soon it became one of the key albums to come out from the early 80s scene that was rapidly changing the face of Spanish music.

The LP embraced the dark sound and image represented then by UK bands such as Bauhaus, Killing Joke, The Cure or The Damned and filtered those influences through Benavente’s inmense talent and his captivating presence as a performer. The record was a mature and strong piece of work, superior in sound and overall effect to most contemporary Spanish albums.

When everything indicated that the band was only starting its greatly promising career, a fatal car accident on their way to a show took Benavente’s life when he was only 20 years old. Although another single was released weeks after and the other members would carry on being involved in music, this tragic event meant the end for Parálisis Permanente as a band.