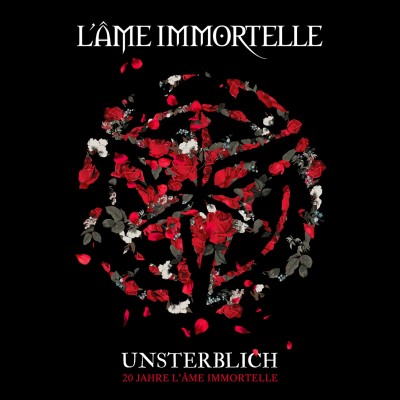 Standard edition CD in jewelcase with 28 pages booklet. Contains 13 of the most popular LAI Tracks in completely new recorded 2015 versions! All songs have been re-recorded by by teaming up with Krischan Jan-Eric Wesenberg (ROTERSAND) and Gregor Beyerle (SKYLA VERTEX, REAPER) resulting in a sound, that marries the Electro bones of their early days to the production standards of today, thereby creating something new and stunningly epic. In a unheard-of show of strength the band and their producers succeeded in conserving the early pieces' unparalleled aura and yet creating an all-new listening experience!

L'ÂME IMMORTELLE... the very mention of that name strikes a chord, unleashes an army of goosebumps on the back of anybody equating music with acoustic emotion L'ÂME IMMORTELLE... introductions are unneces- sary, to be sure. They are a scene legend, a band always at the top of their game despite their reluctance to stagnate, a band enriching the Gothic movement like few others in the 20 years of their existence. For two decades now, they have been writing history, have been cladding our woe in moving compositions. Not many bands endure being in existence for so long. Still fewer projects pull the trick to remain relevant all these years. From their early beginnings as a figurehead of Dark Electro across the unrivalled success in the front row of Gothic Rock to their more current, artistic records brimful with theatralic grandezza, Thomas Rainer and Sonja Kraushofer established themselves as the grand maestros behind the keys of human emotions. Over and over again, they fathomed the battlefields of inner conflict and valour, of broken hearts and arising hope. Their love of music, their dedication to their art made them survive 20 years atop an inexorable industry. This is what invigorated them, united them and made them all the more determined to continue giving more than the others. No wonder that celebrating the 20th anniversary with a dull best-of compilation was unthink- able for the iconic duo. The sheer amount of passion L'ÂME IMMORTELLE inject into the extraordinary compilation „Unsterblich – 20 Jahre L'ÂME IMMORTELLE“ is nothing short of striking. Much adored classics from two decades of darkly romantic music history, compiled from every single chapter, every single official release and every single form of artistic grandeur blaze in the light of an entirely new sound. This is a most extraordinary form of musical time travelling, a simultaneous look at the past and the future of the trailblazing entity that is L'ÂME IMMORTELLE. As a voluptuous extra, this opus is further refined and graced by countless rare and unreleased photos from Sonja Kraushofers and Thomas Rainers archives, adding a mesmerising visual component to this musical body of work. 2016 we're all going to be immortal. Come prepared.