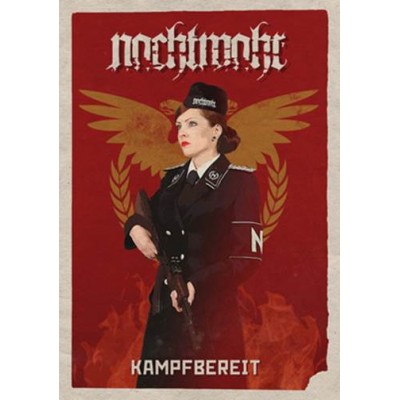 ATTENTION: The first edition of the album is released as a strictly limited edition in book format:

The new NACHTMAHR record „Kampfbereit“ („Ready for combat“) is heralding a return to the apocalyptic din of the project's early releases and is shrouding the aggressive title in an industrial colossus. More than ever before in its provocative career, NACHTMAHR is the nightmare per- sonified for all those numerous people who are painfully aware of merely having jumped aboard this monstrous TBM train. NACHTMAHR, however, never lowered itself to pointing fingers at all those who at first ridiculed and criticized the projects' ravishing beats and its' martial appearance only to become poor copycats shortly after. These so-called artists have to live with what they did. What indeed could be more satisfactory? What the new NACHTMAHR album sounds like, you ask? Why, you should know that better than anyone. It is the metallic noise of resistance. It is the wailing outcry of the sirens. It is the thunde- ring bellow of a thousand marching boot. It is superiority's very own music. „Kampfbereit“ is uniting the memorable songwriting of the later efforts with the sound of the early works to a bloody bond of Imperial Industrial. It is the very essence, the sum of all this project ever stood for, is standing and will stand, additionally strengthened by a relentlessly precise production handled by Krischan Wesenberg (ROTERSAND).

Resistance is futile. But you are very much welcome to carry on trying.