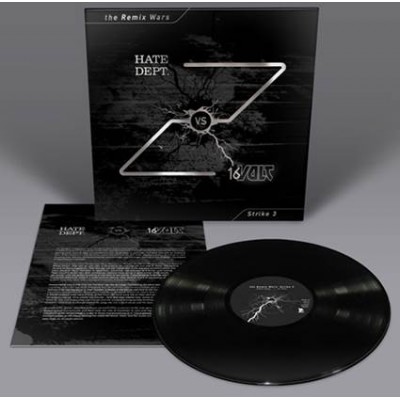 Twenty years ago, in the mid-90s, before remixes were suddenly everywhere along came a series of releases in 1996, which, not entirely new, shook things up and in many ways defined an era: The Remix Wars. The concept of The Remix Wars was simple enough: two artists remix one another and release the results on a collaborative CD. The idea had been done before, but never on such a grandiose scale, and never with such a breadth and depth. First, the artists: a pair of 1990s EBM/industrial bands in wumpscut vs. haujobb; a pair of classic 1980s bands who had taken a decidedly metal spin on industrial in Front Line Assembly vs. Die Krupps; and a pair of then-new bands with a new spin on industrial and EBM in 16 Volt vs. Hate Dept. Second, the collaboration between labels: 21st Circuitry, Off Beat, Cleopatra... and Metropolis would join the fray in 1999 for Volume 4. And, finally, the desire to experiment and re-work tracks, not simply to make a club hit but to authentically give voice to a different artist through the lens of technology. It was a thoroughly collaborative effort, on every level.

On the 20th year anniversary of the launch of The Remix Wars, Artoffact Records will release the first three volumes (Strikes) on special edition vinyl.

- An amazing new design has been prepared for the reissues

- Each sleeve will include hot silver foil stamp on the artist logos and Remix Wars logo (it's going to look beyond wicked...just wait for the real-life sleeves!)

- Each record will be released as a special collector's edition colour vinyl, as well as an audiophile's black vinyl edition.

- All audio has been remastered for vinyl

- Each release comes with an insert that includes an essay by Sharon Kyronfive, former 21st Circuitry employee and current I Die: You Die columnist.