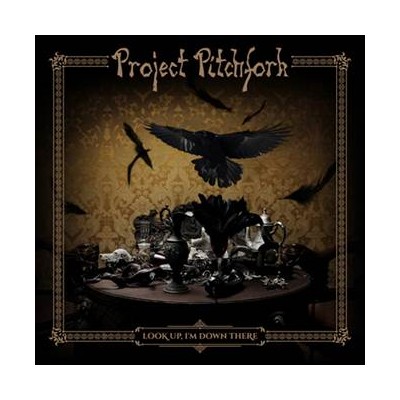 PROJECT PITCHFORK – LOOK UP, I´M DOWN THERE DIGICD

The new PROJECT PITCHFORK album is a turning point. The beginning of something new, built on the foundation of an unprecedented career and released in time with the commemorations for the 25th anniversary of this pioneering act. It is rewriting history once again, too. Like never before, Peter Spilles injects the entirety of his vast artistic work into a single release, embracing the myriad of inspirations, visions and sounds that have orbited him since day one. This is an album unique in its musical thickness and yet proves to inspire and surprise every single second of its duration.! Thus, a precise musical categorization has become utterly obsolete. Being a project that single- handedly invented, hatched, nursed and boosted dark electro, “Look up…” is nothing short of an awe-inspiring demonstration of darkly emotional music. The crisp EBM beats of the early nineties, voluptuous melodies from the late nineties, the futuristic and pulsating sequences boosting PP's career in the new millennium, plus a fair share of his biting cynicism coalesce in a visionary new mother-ship of dark electro. It's not about single songs or the occasional club hit - it's about the glorious entirety of the record. The ‘sound’ is only half the reason as to why this release reaches new artistic heights. The lyricism reveals Peter Spilles' most personal introspections yet. Ruthless, direct and unfiltered, he is per- mitting a deep gaze into his inner most life. From its inception, intrigued by space and its infinite possibilities, “Look up…” combines two sides of mankind´s epic history, seen through the eyes of a single individual. War, loss, exploitation of nature, isolation and the cataclysmic triumph of social media all paint the lyrical canvas with dark colors. Hope arrives in shape of a presence that senses good in all of us, imploring that we never to cease to love, ask and feel – “Look up, I'm down there”. Look up and you will realize that you are not alone – whatever may happen. This is what makes the 17th PROJECT PITCHFORK record perhaps the best, and most certainly the most important and salubrious beacon of their stellar career.