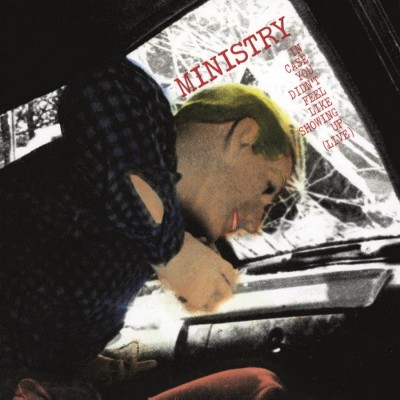 MINISTRY - IN CASE YOU DIDN'T FEEL LIKE SHOWING UP (LIVE) LP

American industrial metal band Ministry was founded by lead singer Al Jourgensen in 1981. Originally a new wave synthpop outfit, Ministry changed its style to become one of the pioneers of industrial metal in the mid-80s. In Case You Didn't Feel Like Showing Up is a live album by the band. The album was originally released in 1990 and contains the live show performed in Merillville on February 22, 1990. The album is six songs long, but delivers big time for each of them. The energy, the maniacal chaos and an order under the surface of this chaos. "Onstage, the founding stars of Chicago's industrial-noise movement come on like a battalion of bare-knuckle soldiers. In Case You Didn't Feel Like Showing Up, a six-track live set features mad-dog bandleader Al Jourgensen barking over a barrage of rock noise synchronized to hammering rhythms. Ferocious fun if you can stand it". – Entertainment Weekly In 2005 In Case You Didn't Feel Like Showing Up was ranked number 328 in Rock Hard magazine's book of The 500 Greatest Rock & Metal Albums of All Time.