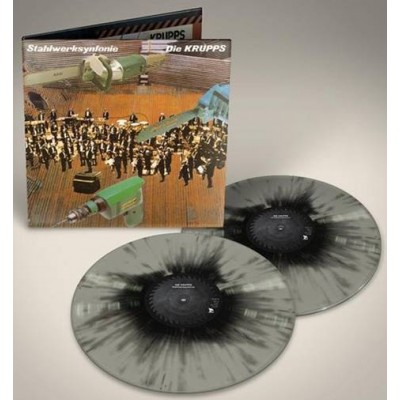 Limited edition on grey/black splatter effect Viny in deluxe GATEFOLD Sleeve. First EVER re-issue of the legendary 1981 Album on Vinyl! This double Vinyl includes bonus material that has never before been released on vinyl.

Originally put out on the famous Zick Zack (who also released the first Einstürzende Neubauten…) label in Germany in 1981 as a 12", Stahlwerksynfonie is a legendary industrial masterpiece that truly marked the beginning of an era. It was recorded in CAN's famous Innerspace Studio (with Holger Czukay in attendance!) on March 20th, 1981, but several live and alternate recordings never saw the light of day until 30 years later when they were released as part of a Die Krupps CD reissue series.

To this day, Stahlwerksynfonie and the early live material has never received a vinyl reissue. This Artoffact Records double album reissue contains bonus tracks and the live recordings, including extensive liner notes and historical photos. The project was overseen by Juergen Engler, and the two records come in a gorgeous gatefold sleeve. A must-have for fans of early steel-clanging, industrial!

"Die Krupps began with „Steelworks Symphony“ in 81, a foundry full of steel-on-steel impacts and carbonized guitars put through a waste-disposal unit, work-to-rule, fatigued assembly-line rhythms developed with help from Can's Holger Czukay. That, they say, was their “farewell to guitars”." -Paul Oldfield, Melody Maker July 1989

TRACKS A: A1. Stahlwerksynfonie A, A2. Wahre Arbeit Wahrer Lohn, A3. Stahlbad

TRACKS B: B1. Stahlwerksynfonie B, B2. Schmerz aus Eisen, B3. Diese Nacht