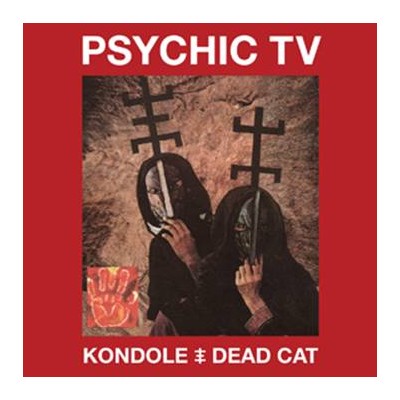 CD1 features the complete, long (complete) version of ‘Dead Cat’. “…what could be more beautiful that such a sustaining & chronic radical as Gen could have provided us all – in the form of KONDOLE – with a piece of truly necessary Everyday Listening?” (Julian Cope / Head Heritage).

CD2 contains 3 tracks: ‘Thee Whale’ was recorded in 1988 and is the soundtrack to an unmade 23 minute film called “Kondole (Thee Whale)”, by David Lewis and Andy Crabb.

‘Thee Shadow Creatures’ was recorded in San Francisco on 23rd January, 1993. ‘Dead Cat’ was recorded in London in 1989 and is the soundtrack to the film by David Lewis. DVD: The film ‘Dead Cat’ was released in 1989, and shown only at a handful of cinemas that year, including once at the infamous Scala Cinema in London. It was never issued on general release and has only recently been uncovered by David Lewis (writer & director). This package presents the full film, re-authored from the original source. The film itself features unique starring roles from cult film director Derek Jarman, Andrew Tiernan (‘The Pianist’, ‘300’, ‘The Bunker’, Derek Jarman’s ‘Edward II’) and Genesis P-Orridge (Psychic TV, Throbbing Gristle). The film features the music of Psychic TV, included here on CD1, in its complete form.