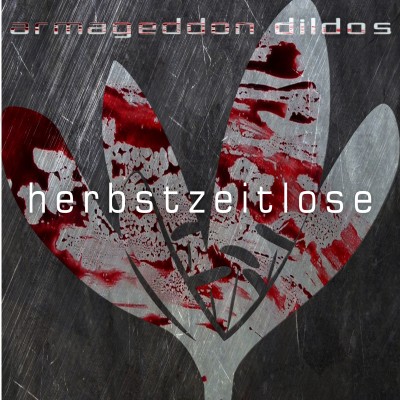 In the middle of the recording process of the much anticipated forthcoming new album of ARMAGEDDON DILDOS, Uwe Kanka decided to break the silence with this unique extended EP and its apt, beautiful and poisonous title: “Herbstzeitlose” on which the cult German EBM band reveals some 4 brand-new tracks plus 7 bonus remixes for your ultimate ear pleasure! Starting with the 7” version of “Intimidated”, this new EP rips straight into it with invasive stereo sample manipulations, a good old strong fat bass-line, minimal catchy electro melodies and powerful vocals! Then comes the unexpected 2.0 version of the band’s legendary hit “Resist” that actually is a totally new song only using some slogans from the original version! Initially inspired by the Gulf War in the early 90’s, the 2.0 version got upgraded and influenced by all latent threats and other conflicts and wars raging across the world yesterday, today and tomorrow, recently stigmatised by the worrying escalations of power demonstration between North Korea and the USA. So let us all unite and sing “Resist - structures of evil” at the unison before the whole world turns into another sea of flames… The sonic assault reaches its peak on the following “The Constant Beat” with its punchy beats and its addictive call to get your body move to the “EBM” beats! The virulent and catchy “Mandy Crash” comes closer to gritty elektro punk evoking FRONT 242 singing SEX PISTOLS!