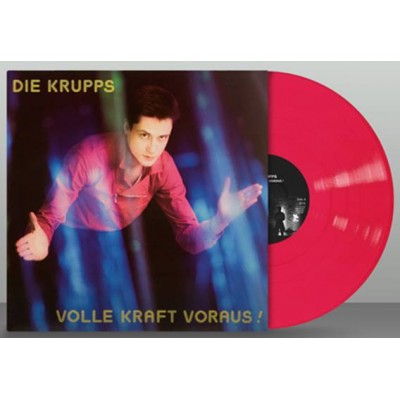 First EVER Vinyl reissue of this classic 1982 EBM album, that had a HUGE influence on count- less EBM acts, including NITZER EBB, who later collaborated with Die Krupps for a re-release of ‘Wahre Arbeit, Wahrer Lohn’ as ‘The Machineries of Joy’! Comes in re-mastered audio + restored cover artwork! Includes the 3 hits "Wahre Arbeit, wahrer Lohn", “Für einen Augenblick” and "Goldfinger"

Die Krupps' second album, released in 1982, is one of those long-lost gems which, had the band not become industrial-metal gods, would probably be better known worldwide as a proto-EBM masterpiece. That the record includes both "Wahre Arbeit, wahrer Lohn" and "Goldfinger" is enough proof of its stake as a precursor to the sounds of bands like Nitzer Ebb, who's demo came out the year after, but with such a wide-ranging experimental, industrial, and heavy metal history, it's easy to forget just exactly how deep Die Krupps' roots go. Despite its iconic and influential status, Volle Kraft Voraus has never been reissued on vinyl since its first pressing by Warner in 1982. The first CD version hit in the 90s and a deluxe 2CD reissue came out 10 years ago, but the all-important vinyl reissue never saw the light of day, until now!