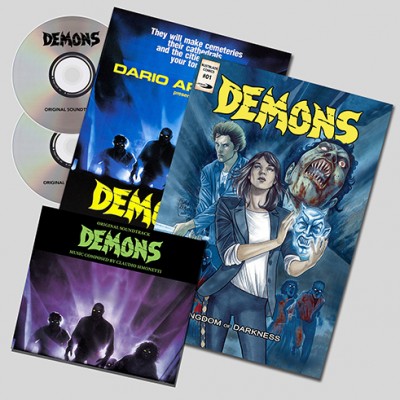 Ten years after ‘Demons’ and ‘Demons 2: The Nightmare Returns!’, the anthological series “Rustblade Comics” by Stefano Rossello, introduces a new and hefty comics chapter as a gift to the cult movies, directed by Lamberto Bava. Andrea Gallo Lassere and Simona Simona (from the hit Dawn of the Dead – Hotel La Muerte), show you the fine line between nightmare and reality, and they will lead you where the Evil, in its purest form, begins. The sublime illustration realized by the cartoonist and illustrator Lola Airaghi (comic book artist for Brendon, Dylan Dog, Morgan Lost), opens the demoniac doors. A claustrophobic story made of gore and rivers of blood, to read and listen together with the soundtrack created by Claudio Simonetti's Goblin!

COMIC BOOK PRESENTATION: Ingrid Haller is a famous writer. She dreams of Demons and writes books about them. She goes towards the subway after the launch of her latest work, “Kingdom of Darkness”, and, in a frenzy and bloody night, she finds her nightmares waiting for her at the last station.