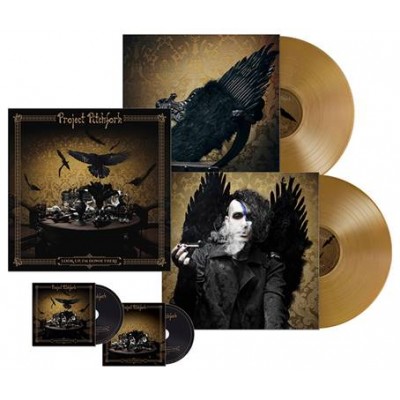 CD #1 contains the studio album ‘‘Look Up, I’m Down There’

Original Album info from 2016: Being a project that single-handedly invented, hatched, nursed and boosted dark electro, “Look up…’ is nothing short of an awe-inspiring demonstration of darkly emotional music. Those being familiar with the work of tireless Peter Spilles will be delighted how skillfully he employs tropes of two and a half decades of dark electro history. The crisp EBM beats of the early nineties, voluptuous melodies from the late nineties, the futuristic and pulsating sequences boosting PROJECT PITCHFORK's career in the new millennium, plus a fair share of his biting cynicism coalesce in a visionary new mother-ship of dark electro. It's not about single songs or the occasional club hit - it's about the glorious entirety of the record.

B1 Look up, I’m down there B2 Volcano B3 Sunset Devastation B4 Open with Caution B5 Furious Numbers

TRACKS CD2: 6 bonus-Tracks as above