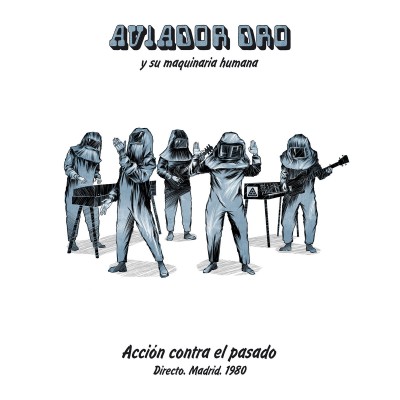 Limited edition of 400 copies with a A2 size colour poster. Drawings created by the Polish artist Michał Arkusiński.

Aviador Dro are without a doubt the most avant-garde and influential techno-pop band from Spain. They started in 1979 and this year are celebrating their 40th anniversary playing shows, re- releasing some old works, publishing a book and also a new album. "Acción Contra El Pasado” was recorded in Madrid in December of 1980 and is one of the oldest live performances of which there is a recording evidence. This concert is legendary not only for its age, but also for including some unreleased songs, a couple of early covers by Kraftwerk and Sex Pistols and vintage versions of classics tracks. "Aviador Dro y su Maquinaria Humana" (exactly as it was announced on the original flyer) was formed at that time by Biovac N, Fox Cicloide, Placa Tumbler, Derflex Tipo IARR, CTA 102, X, Metalina 2 and Cyberjet. A priceless piece of history restored and remastered from the original cassette recorded directly from the mixing desk.

TRACKS A: A1 La Interferencia A2 La Modelo A3 La 5ª Glaciación A4 Cadena de Montaje A5 Nuclear Sí A6 La Chica de Plexiglás