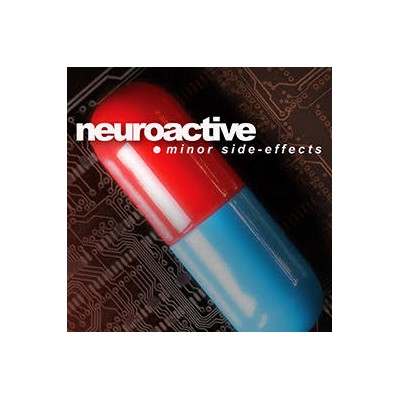 2020 could not start any better than with the stunning comeback of Finland’s best electro export to date: NEUROACTIVE in its original line-up!

It’s back in 1991 that Vesa Raine, Ville Brusi and Jarkko Tuohimaa created the now cult synth Pop / EBM band NEUROACTIVE. Almost 30 years later, headmaster Jarkko Tuohimaa had the brilliant idea to rewind time and reunite the 3 good old friends and the studio magic instantly ignited! And it’s no surprise that songs like “In Rust We Trust” or yet “All Forces Integrate” evoke the band’s early days and make echoes to their major club hit “Space Divider”. “Minor Side-Effects” indeed reveals a much harder edge through punching electro sequences and kicking beats compared to NEUROACTIVE’s most recent softer dance pop releases through the US-based A Different Drum label – more back to the original sound as known from the (long deleted) albums on Cyberware and Out of Line. This said, we can still see this new 7th full length studio album as a logical and natural evolution in the band’s impressive music repertoire and its characteristic fusion of catchy vocals, modern melodic synth arrange- ments and carrying electronic beats. “Modern Synth-Pop”, “Future-Pop”, “Techno-Pop”, whatever you call it, NEUROACTIVE confirm here more than ever their veteran supremacy in the genre thanks to intricate songwriting skills and a meticulous production work that can make many artists in the genre quite envious.

“Minor Side-Effects” is no doubt NEUROACTIVE’s album of maturity offering us some promising perspectives on the electro synth pop scene for the many years to come. To consume without moderation: addictive side-effects guaranteed!