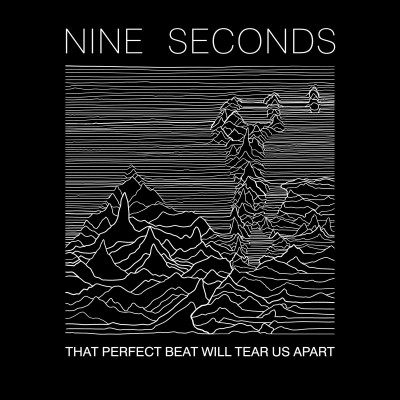 NINE SECONDS - THAT PERFECT BEAT WILL TEAR US APART CD

When I got back home Ricky’s hand (1) was on the couch, cut off. His finger still on the remote control; MTV was showing Hit that perfect Beat Boy (2). Ricky had always been a good friend, but had also predicted that Love will tear us apart (3). And so it had; we both fell in love with Dr Mabuse (4)’s daughter, Sabrina. She owned a butcher’s called Slice me nice (5), was 19 (6) years of age and enjoyed talking dirty. She would even cuff me and whisper Lie to me (7). And then I did eventually.

It was so unreal, as if I was Living on video (8). That same evening I saw Ricky in the butcher’s, but he was behind the counter, chopped into pieces. He was being sold as pork joints. That was too weird for me, so I told her: No shuffle (9). We separated on good terms; at least so I thought. But then I saw the hand on the couch at home, I knew I only had another Nine Seconds to live. But it didn’t end there. When I arrived at heaven’s door, Peter said to me: Lie to me (10). I saw fire and women clad in black. I asked him what was going on and he said it was Black Saturday (11). I quickly realised that Dr Mabuse (12) had taken over heaven’s management to shoot music videos. He offered me a minor role in Living on video (13), but after only Nine Seconds I was gobbled up by a flying spaghetti monster and was definitely dead…