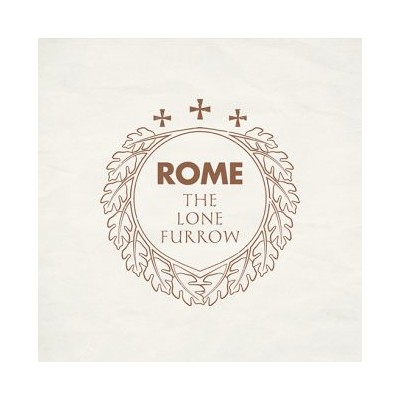 Following on from the universal acclaim of their latest LP “Le Ceneri di Heliodoro”, ROME releases one of the most impressive releases in its prolific career of 15 years. "The Lone Furrow" is the logical culmination of all of ROME’s previous endeavours, a brilliant and patient demolition of the despiritualised modern age, timeless in its critique of man’s greed and the deliberate desecration of beautiful things.

The record opens up with the cryptic rhymes of “Tyriat Sig Tyrias” - an invocation of strengths thought forlorn. On “Ächtung, Baby!” (a tongue-in-cheek reference to U2’s 1991 hit record) Jerome is joined by Alan Averill of metal cult band PRIMORDIAL. Indeed, the features and guest appearances are numerous on this record. This shows the fact that, through years of composing high quality albums, ROME has become a secret authority in the European under- ground as a songwriter’s songwriter. And thus, Reuter, a poet with the soul of a warrior, has managed to assemble an impressive/stellar cast of guest vocalists. Most notably is the guest appearance of BEHEMOTH’s Adam Nergal Darski on the seminal "The Angry Cup", on which Nergal not only performs lead vocals but adds an intriguingly brutal Polish incantation. Further guests are Joseph D. Rowland of US-doom band PALLBEARER, J.J. of Austria’s HARAKIRI FOR THE SKY, as well as Laure Le Prunenec of metal-opera act IGORRR, who delivers the phenomenally eerie layered vocals on "Palmyra".

At the centre of these songs we find the individual mediating between a sense of history and an experience of the world. ROME illuminates us on the fact that art is to make our world whole and comprehensible, restoring it to us in all its glory and all its darkness, not through argument but through feeling and thus closing the gap between individuals and thus transcending from feeling to meaning. In this way, art can reconcile us to human life through the pursuit and cultivation of beauty.

On “The Lone Furrow” ROME weaves a fantastical tale in which gods and men alike ache and tremble and which reminds us that the world is much larger than our ideas of it, our traditions much deeper than we imagine. Most importantly, ROME refuses the easy answer.

The Standard CD edition comes in Digipak with Booklet