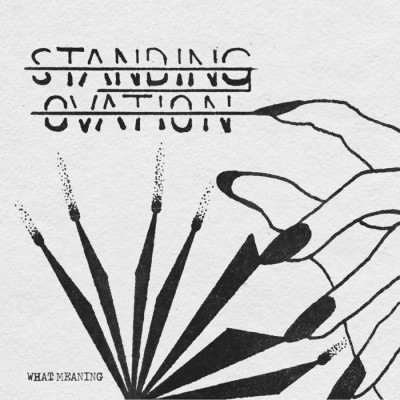 STANDING OVATION was a short lived project from Clacton on Sea, UK, created by the very young Paul Bramhall and Glen Redgen in 1982, while they were still at high school. Armed with a Casio MT40, a Korg Polysix, a Korg M500 and a Boss DR55 drum machine plus a guitar and a bass they booked a local studio on 22nd October 1983 and recorded two songs in one day. The two tracks were released on cassette by the also local Falling A label shortly after. They continued making electronic music for a further two years and seeking collaborators through the papers they managed to include a drummer and a lead guitarist, but the sound changed and was no longer the electronic sound that Paul desired. After a few local gigs they drifted apart with musical differences.

The WHAT MEANING / TIMES OF FUN cassette didn't have much repercussion back then and being impossible to find nowadays we decided to give it another try on vinyl. WHAT MEANING is a true minimal synth masterpiece, with its pulsating bassline and overall dark feel. This genre just doesn’t get any better. TIMES OF FUN is a much brighter, poppy tune that puts a smile on your face.

The two songs have been transferred and remastered from the original ¼” reel tape and the also minimalistic but beautiful hand-drawn original artwork has been adapted and enhanced to fit this 7” release.