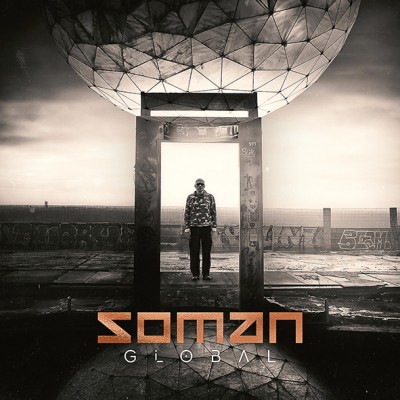 Where does man end and machine begin? Serving as an extension of our own self, digitalisation long blurred these lines. After all, what is human after our consciousness dissolved in the pool of collective memory like tears in rain? Kolja Trelle does not have answers for that. Yet, he uses his legendary electro vehicle SOMAN to seek meaning in these borderlands. His trademark sound is hard hitting and precise, yet passionate and full of longing, adrenalising and shattering at the same time: The electronic breath of this world.

His latest release is called “Global”, and for good reason, at that: It’s his personal manifesto against stubbornness. While SOMAN are pulverising the long obsolete borders between Techno, Industrial, Electro and Noise with renegade electronics, the project is also contributing to understanding the complex threads between man and machine, between man and mankind, man and nature. And seeing how relentlessly throbbing and explosive these missiles of pure electronic euphoria are being fired as if the next big club banger wasn’t a question of luck but of given birthright, one thing becomes crystal clear at once: After the torturing silence between “Noistyle” (2010) and “Nox” (2019), Kolja Trelle has tasted blood again.

After the purest satisfaction of all his electronic needs, as he described his last release, SOMAN is delivering a coup de grâce for the rest of the genre with the both emotional and elementary force that is “Global”. A record carried by colossal beats, monumental dynamics and pulsating melodies, a maniufesto of unity, a techno driven “per aspera ad astra”. Through hardness to the stars. This step has rendered many frontiers meaningless. In our minds, but also in this chimerian music on “Global”. And what do we behold if we gaze beyond these frontiers? New horizons. As far as the eye can see! “‘Global’ is about embracing the unknown, even though it’s not always easy,” is how Trelle puts it.

Translated into music, it means that it’s not only harsh for the simple sake of it. “Global” is an arranged piece, a coherent, a self-contained record with the highest highs and the lowest lows. Aggressive if needs be, soft if needs be, guiding us from futuristic and progressive techno dystopias via mesmerising trance and classic electro craft to nostalgic wave and monotonous EBM. And back again. Somebody really let off steam here, that’s for sure. And the good thing is: Now it’s our turn.