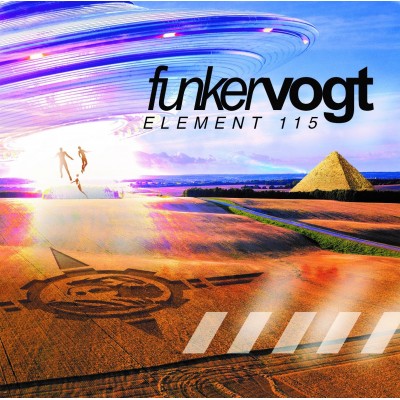 It's been 4 years since Chris L. picked up the abandoned microphone at Funker Vogt and the radio operators Gerrit Thomas, René Dornbusch and this very Chris L., made a tough statement about why they clearly belong at the spearhead of this scene. They can not and do not want to be quiet in 2021 either, and so on their new album "Element 115" they fire a lot of explosives into the masses.

The core of the topic is the theory of pre-astronautics, which in short implies, that the gods of mankind were extraterrestrial visitors and have been visiting the earth for thousands of years. According to Bob Lazar, a former Area 51 scientist who made public appearances back in the 1980s by publishing secret information, the Element 115 is used to power a gravitational propulsion system with an antimatter reactor as its energy source. It is astonishing how detailed he describes his work in Area 51 and what he experienced there.

Funker Vogt will not, however, be walking through the city centers in self-sewn stretch suits and aluminum hats trying to convert people. This is only about the possibility of these theories - what if...

"Prepare for Invasion" booms out of the speakers and so Funker Vogt do not just take any prisoners with the tough "Invasion", because "Any different way of thinking is conspiracy theory", as it is called in the club-track "Olympus", and so songs like "The Grey", "A.I. and "Abducted" are under the motto "We do not negotiate with terrorists" and say welcome to the war on the dancefloors.

But Funker Vogt wouldn't be Funker Vogt if they did not distribute thought-provoking im- pulses in all directions. Beginning where they have already started with the “Conspiracy EP”, the cinematic opener "What if I'm wrong?” picks up questions about our existence and our meaning in this universe. And this red thread runs through to the final, threatening "A Step into the Dark".

Not only musically the 13 tracks, plus 7 bonus tracks on the limited edition, invite to penetrate into new musical and lyrical vastness, Funker Vogt never presented themselves more mature and concise in terms of production technology.

That Gerrit Thomas and Chris L. have invested much more time in the production can not only be heard on "To the Sun", sung in 3 languages or the almost spherical tracks like "GAIA" or "Lost"! Exceptional titles like "The Wanting" proof the mature, sonic diversity that Funker Vogt has finally merged into one unit.

Even in the 25th year of the band's history, Funker Vogt 2021 are far from being an old hat – more mature and stronger than ever before!

TRACKS CD2 [ONLY with the first Limited edition!]: