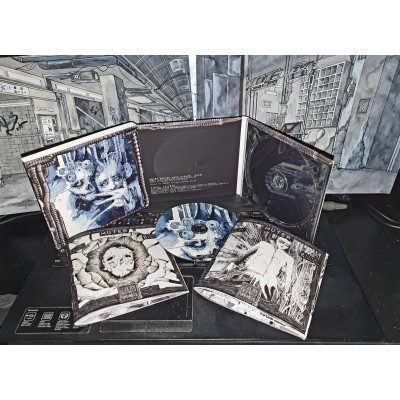 …and the new label immediately starts with a BANG! Although the price for this album might appear elevated, believe me when I say that the cost is MORE than justified! Indeed this monster release comes in a really outstanding ‘must see to believe’- deluxe packaging: Digipak inside an outer slip-case (in very ‘H R Giger’-kind of design!), that also includes two MASSIVE 40 pages booklets, that together form an amazing 80 (!) pages graphic novel !!!

One of THE most important releases in the industrial genre for long – also choosen as “Album of the Month” in the electro/alternative section of Italy’s leading print music magazine RUMORE!

Amazing review from idieyoudie.com: New Italian act Kurs approaches their debut LP with rare confidence: a cyberpunk concept record complete with its own graphic novel isn’t a typical opening gambit. But thankfully the execution of the music itself more than meets that ambition, and in Muter yields a satisfying and varied record which shows a canny knack for rich and weighty electro-industrial. (…) Muter is up-front about its debt to formative electro-industrial as well as more recent acts. At different points it’s easy to catch hints of classic FLA, Haujobb, Statiqbloom, Sequencer-era Covenant, and the menacing mystique of that most beguiling of the bands who got away, Inter- lace. Those are some pretty heavy-hitters to mention in comparison to a debuting project, but Muter never sounds derivative, and a combination of Rivieccio’s confident vocals and relatively complex arrangements keeps the record driving forward through its own momentum. Muter is the sort of record we at I Die: You Die wake up each day hoping we’ll discover – something fully realized and developed (rather than just promising future returns) from an artist who’s brand new to us. Kurs is using familiar genre styles and sounds to produce an album with its own distinct flavour and character, and with some killer tracks to boot: no mean feat. Recommended. Buy it!