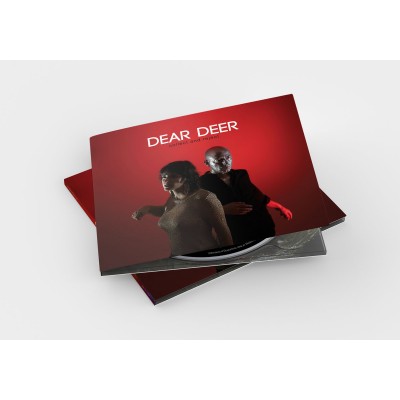 The CD contains one exclusive Bonus-Track, a ‘club edit’ of ‘Love like Capitalists’!.

For this third album, DEAR DEER wanted to mix dancefloor, disco and Berlin atmosphere. This third step confirms their desire to make people dance while bringing a new serenity to certain tracks. 'Collect and reject', continues to dig into the musical references close to their hearts: we recognize the drum machine TR 808 mixed with the TR 809, sound textures close to Giorgio Moroder, guitars in a nod to the avant-garde rock of SonicYouth. This desire to tend towards the ultimate nightclub track had been explored with the second album, but in a more punk and aggressive way. “Collect and reject” is intended as a electro and rounder evolution of their work.

Beyond this atmospheric alchemy, there are also more collaborations on this album than on the previous record. Additional warm vocals were brought in by Audrey Rudy Cat on “Love like Capitalists (club edit)”, Barbi Roza added her funky, spacey guitars on “Deux” and tradi- tional guest, Karim Shukeim (Phantom Limbs / Loto Ball) came to lay his trumpet on “Backward Groove”.

This duo from the capital of french Flanders forms a couple both on stage and in real life since 2015. Influenced by The Kills, New Order, or even the B-52’s, their sound is at the crossroads of pop-rock, electro and new-wave. Glamorous, their glittery aesthetic sustains a disco and nervous rhythm, coated with fuzzy bass and guitars. Tailor-made for live circuit in a small club or at the borders of Western Europe, they share their furious desire to dance, it smells like holidays in Berlin and the 80s dancefloor!.

After a self-released demo, quickly appears the first album “Oh my…” in 2016 (Manic Depression/ Swiss Dark Nights). “Chew-chew” (Manic Depression/Swiss Dark Nights), their second album re- leased in 2018 appears to be even more dancing. Their third album “Collect & reject”, even more influenced by a disco and electro atmosphere, contains two colourful videos singles “Joan” and “Love like capitalists” (club edit). The CD version (incl. 1 bonus-track) will be released in May on Swissdarknights.