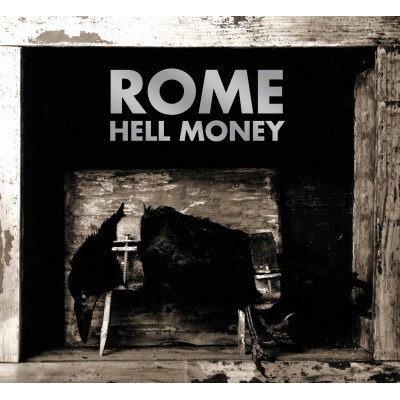 Also deleted since February 2017, ‘Hell Money’ was originally released in October 2012, and is among the most beloved ROME albums with fans!

„Hell Money“ is different. You’ve probably known ROME as an entity creating an invigorating meta-political, para-religious universe, functioning according to its own code and incorporating all kinds of elements from history to philosophy and musical expressions into one catchy collection of songs within an industrial-ish, brainy collage. „Hell Money“ is different. You’ve most likely heard Jerome’s voice as coming from the depths of pan-European wisdom, toying with poetic elements from expressionism to post-modernism, with each word of poetry sucking you way more into a sweet world of oblivion, a soothing chanson crooner indebted to the traditions American and European folk. „Hell Money“ is different. You’ve come to love ROME’s concept collages, shedding new light on the realities of the world and its history, whilst giving a voice to the downtrodden. „Hell Money“ is –yet again– different. „Hell Money“ is an emotional tour-de-force through the twisted inner workings of a tormented individual. A journey into a heart of sadness, where greed, addiction and self-immolation have taken their toll on sanity. The songs remain fragmentary and crude. The voice on this album is not the voice of reason, it is an individual unashamed, yet deeply tormented by the demons that have come to haunt it. The music is built primarily by an anger-driven acoustic guitar and a voice bereft of poetic hipness. No martial drums, no retro-sampling, but drums and sampling nonetheless. „Hell Money“ is sparse, crude, intimate, sick... and ultimately honest.