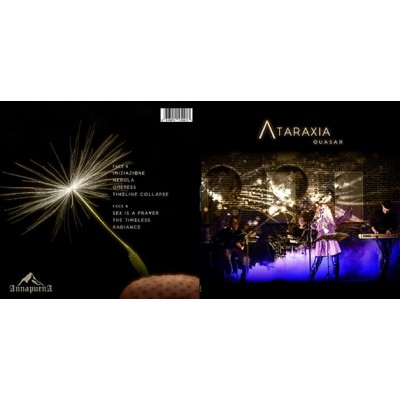 Limited Edition BLACK VINYL of the all new album, in completely different Artwork and Including the 7 ‘main’ tracks of the CD!.

Now, aligned with longtime fans AnnaPurna, ATARAXIA celebrate 30 years of activity with the publication of the new album Quasar, that includes seven tracks and over 55 minutes of new music. "We worked on seven archetypes," the group says. "The number of grace and realization - seven, the colors of the rainbow - one for each song, and these informed energies have archangelic names. Powerful information flows that balance the four elements of fire, water, air, and earth inside and outside of us, with the fifth etheric element above the crown." In astronomy, quasars are very distant objects that have to emit energy equivalent to hundreds of normal galaxies. Thus, the namesake Quasar is more than suiting here, for ATARAXIA take you on a wondrous journey into the event horizon, the beating heart of every galaxy.