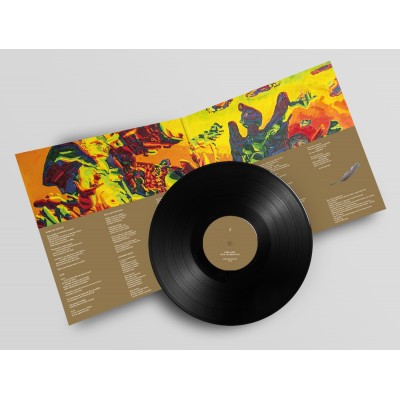 Limited Edition of 400 copies in a Deluxe GOLDEN Gatefold Cover + 4 colour print. Before your read on, check it out on Youtube… It’s highly recommended to dive into and get lost in the sound of this amazing album!

One of the absolute masterpieces in avantgarde/neoclassic music, feat. incredible female vocals and gentle piano, reminding of the best of Yann Tiersen and Anthony And The Johnsons. Originally released on tape in 1996, the complete recordings + a long bonus-track have now been carefully re-stored, remasted and the tracks are being release for the first time on Double-Vinyl and CD.

Infinite Fog Productions proudly presents the 25th-anniversary reissue of the one of most unique albums in avantgarde/neoclassic music! Recorded in 1995 in Ukraine and released in 1996 as just a small run on cassette on Polish label Koka Records, the album without any promotion little by little became legendary and madly wanted by many fans all around the world…and from the first seconds of listening to it, you can hear why it is so!.

"Come, Angel" is one of those albums, that are so unique that it takes you in a vacuum of verbal forms in an attempt to describe the record. In a few words, this is definitely very intimate and deeply emotional music with an absolutely incredible voice. The first associations that might come to mind, are Antony Hegarty from Antony And The Johnsons, Marc Almond, Arthur Russell, Baby Dee, Bjork. Experienced listeners, familiar with these great artist, know that all of them are inimitable and Ihor Tsymbrovsky is totally inimitable as well.

In 2016 well-known German label Offen Music published 3 tracks from the album "Come, Angel" which brought a lot of attention to Ihor's music. Infinite Fog are excited to present this first full album reissue on CD and Double vinyl. Besides the full version of the album, you'll find an exclusive bonus song from the cult compilation "Music the World does not see" - Nefryt Rec. 2000.

"Igor Tsymbrovsky's only album "Come Angel" (1995) still remains perhaps the most bizarre phenomenon in Ukrainian music since independence. The story of its author is a vivid example of cultural amnesia. In the pre-Internet era, Tsymbrovsky was a prominent figure in the Ukrainian underground, performed on the "Red Route", went on tour in Germany. However, he left a mini- mum of evidence of his activity and became a silent legend for a few. The album "Come Angel" is eight compositions performed with a falsetto to the accompaniment of a piano. Despite such ascetic tools, Tsymbrovsky managed to create a phenomenon unique to Ukrainian culture. Some people compare him to Benjamin Clementine and Anthony Hegarty, but no comparison will be exhaustive…” - Amnesia

"The magicians at Dusseldorf’s Offen Music pluck a madly beguiling pearl of late-night songcraft by Ukraine’s Ihor Tsymbrovsky. It was recorded in one take and you can hear the keys being pressed rhythmically in the background, which seems to be the song’s only tangible connection to this mortal world as Ihor vaults octaves high and close-in-the-mix with the sort of alien, dream- like vocal that requires pinching oneself to make sure you’re awake. Spellbinding is definitely the word”