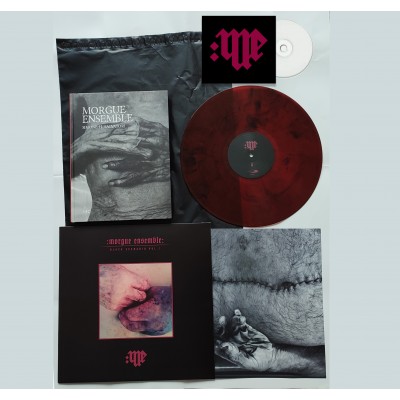 Limited DELUXE EDITION of 30 copies ONLY – coming in a Black Plastic BodyBag, containing:

HEAVY Deluxe BOOK of 128 Pages in a rigid Cover The book with photos and texts (both in Italian and English) was conceived by Simone Salvatori over past years and released in late 2022. It is a testimony of his job apart of his musical career.

A review of the book: "I could not overcome the supreme melancholy that the images in this volume convey, but I could not help but consider the grace at the end of horror. This sophistication had to be told and con- veyed without the cathartic and pedantic solemnity, religious or secular, that accompanies the 'end of life'. The instrument used for the narration (the camera of a mobile phone), comes to our aid, zeroing in on any aesthetic complacency, giving us an icy reality, bathed in neon light, captured in desolate dungeons or in private homes where complete decay reigns. One perceives the inner urgency of the author, who shoots as if this were a personal investigation, a search for the absolute carried out in secret, without being seen, without losing tenderness." (Marco Soellner)

The solo project of Simone Salvatori from the popular band SPIRITUAL FRONT.

This Vinyl contains the material originally released on a super limited Tape (100 copies) in the U.S.

The Music on Black Scenario Vol. 1 is a hypnotic, symphonic dark ambient, whose vibe steers clear of stuffiness, excessive heaviness, turpitude, and decay. The sound was mainly inspired by Simone Salvatori’s day job. A work inspired by the atmosphere of morgues, locations often attended by the artist, who is working as thanatos aesthetician. A slow descent into the abyss, where Morgue Ensemble awaits with an intricately crafted collection of sounds (and sights) from the undertaker's office. A romantic and at the same time “Horror journey” reminiscent the Electronic Sound of John Carpenter, Tangerine Dreams, Fabio Frizzi… added by rhythmic industrial touches in the vein of Lustmord, Zoviet France and Coil.

TRACKS: A1 Intro: Morgue Sueño A2 Touch Me, My Casket is still open A3 Cold Cage A4 Blind Invocation A5 Your Flesh feeds My Dreams A6 Step into My Soul (Cause I’m coming) B1 Body Bag Ænima B2 White Eyes B3 This Silence speaks your Name B4 Don’t wake Me B5 Carry Me down here