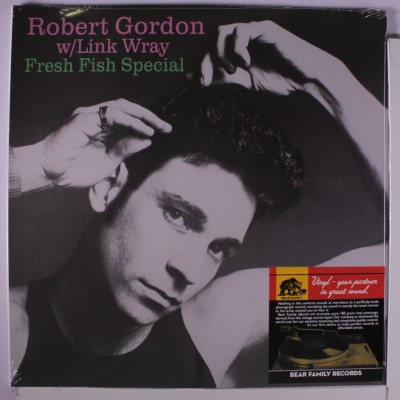 Hailed as great records or CDs at the time, the albums in Bear Family’s new series are now acknowledged as Americana classics. And they’re back after long absences. Even better, they’re back on LP—the medium for which most of them were intended. Better still, the pressing quality and re-mastering is limited-run twenty-first century quality, not to forget the superior quality gatefold sleeves.

​Robert Gordon's 1977/'78 Private Stock LPs with the legendary Link Wray were the best rockabilly revival records because they created something new from the ashes of rockabilly. It wasn't revivalism to either of them—it was new music with all the energy and edginess of new music, rooted in rockabilly's timeless truths. During the sessions for the second LP, Bruce Springsteen contributed a song, Fire, that he'd written for Elvis. He played piano on the session, too. This was the age of Punk and New Wave, and Robert's music not only made believers of those who didn't think any great records had been made since 1957, but made converts of kids who were grooving to Blondie, the Ramones, and the other big acts of the time. Great music will do that! Both Robert Gordon-Link Wray LPs contain one bonus song.