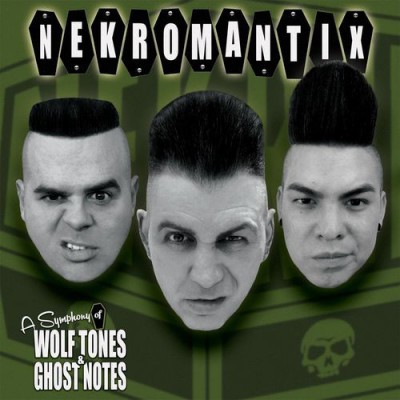 NEKROMANTIX - A SYMPHONY OF WOLFTONES AND GHOST NOTES CD

Kim Nekroman and his coffin double bass are set to return this October as his legendary psychobilly band Nekromantix release their ninth studio album, A Symphony of Wolf Tones & Ghost Notes. The follow-up to 2011’s What Happens in Hell, Stays in Hell is set for release on October 21st via Hellcat Records. Founded in Copenhagen in 1989, the now California-based band features Kim, guitarist Francisco Mesa and new drummer Adam Guerrero. Building off a catalog boasting genre classics like “Who Killed the Cheerleader?” and “Gargoyles Over Copenhagen”

A Symphony of Wolf Tones & Ghost Notes looks to boldly expand their legacy. And, with track names such as ‘War Bats’, ‘Creeping It Real’ and ‘Ghost Babe’ still expect a ton of references and nods to their love of monster, zombie, vampire, werewolf, and B-horror fiction