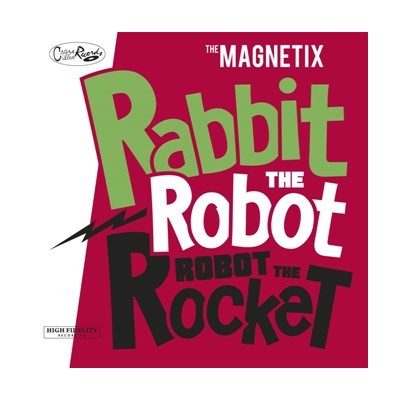 THE MAGNETIX - RABBIT THE ROBOT CD

Amazing new third studio album by this fantastic Psychobilly trio!! When I imagine what psychobilly sounds like in my head, THIS is what it sounds like....fucking mental rockabilly! Tribal rhythms with a tommy gun beat going on between the slap bass and drums and memorable guitar hooks aplenty. It's the kind of psychobilly that makes you want to dance as opposed to wreck. There's a more raw sound to this, The Magnetix third album, in comparison to the previous two and I detect the boys may have been influenced by some of the wilder, more obscure late 1950s rockers and a smattering of lo-fi too. Well, the clues are more than evident in the two well chosen covers which slot in to the album perfectly and compliment the sound to a T. As each track progressed I was wondering if the lads could maintain the quality of music on offer and fuck me pink they did. Sometimes the initial love of a great album wears off just as fast as it appeared because the songs just don't have staying power after a few plays. Well there is absolutely nothing sonically ephemeral about the songs Terry Drybones has concocted here. The man knows how to write instant psychobilly classics. That brings me nicely along to Mr. Moonbeam. This song has gone straight into my list of all time favourite ditties of any genre and shows the guy can sing too! Even the instrumental Drybone Beat is great and I usually hate instrumentals. So we're in November now and I have to say that for me this album is the absolute highlight of the year. It won't be beat! And what's more...when you buy the album you become an instant fanny magnet!