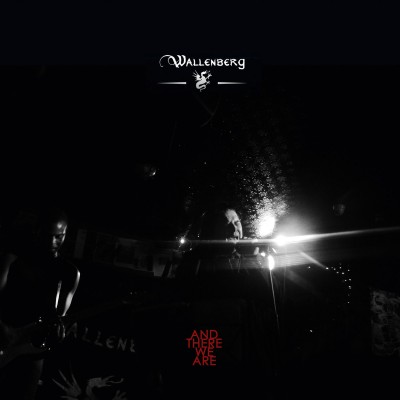 WALLENBERG - AND THERE WE ARE DIGICD

Wallenberg was born in 1983 in Paris, in the heart of the famous Marais quarter, around Hervé Costuas and Valerie Giannorsi. The band comes from the post punk movement and initiated with other French bands the cold-wave movement (Martin Dupont, Little Nemo, Asylum Party, Mary Goes Round ...) and brand by its voiceprint and talent, the Parisian rock scene of the late 80s.

Through hard work and an impressive charisma Wallenberg gained quickly a loyal following. But the band, maybe too uncompromising about commitment and uncompromising about marketing their music, splits prematurely in 1988 at the dawn of a success which would have propulsed them to the top line as they were going to sign with a major company. Hervé then passes through a turning point in his musical career when meeting Stiv Bator (Lords of the New Church) who became his best friend and spiritual father, it allowed him to take a new start with the same enthusiasm. In 2004, Hervé reinvents Wallenberg with the release on Manic Depression Records of a double album" Sea of Sins ", including songs "Ode to Gilles", "An Eye for an Eye", but also cult songs of the 80s: "Someone's changing", "Memories damage" and "Dublin", the bands played then successful gigs with Alien Sex Fiend, Charles de Goal, Vendemmian ...

In 2019 Wallenberg is back with a brand new album whose title says everything "And the we are": This new album was recorded at the very famous 'Studio Garage' in Paris, a place where big French artists signed on major companies record their albums. With "And there we are" the band is back stronger and more inspired than ever: chiselled melodies, powerful guitars and still this inimitable voice which is the trademark of the band, this is French cold wave at its best, don't miss it!

TRACKS: 01 Expect more 02 Last Weekend 03 And there we are 04 The Lizard and the Wolves 05 Carnival Apologize 06 Ballad for an Angel 07 Criminal Initials 08 Bag of Tears 09 Ghost Track (Amazing Grace)