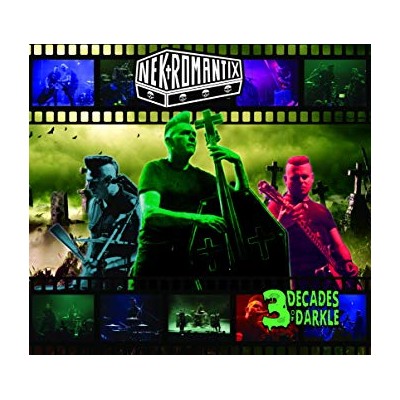 A concert film for Danish-American psychobilly band Nekromantix, Nekromantix: 3 Decades of Darkle, will be released in a Blu-ray/DVD/CD combo pack Oct. 11 from MVD Entertainment Group and Cleopatra Entertainment in honor of the band’s 30th Anniversary.

The limited-edition 30th anniversary release will include exclusive interviews with the band and rare photos that will be packaged in an eight-panel Digipak.

A downloadable version will also be available on global digital platforms, coinciding with release of the home entertainment version.

The band was formed in 1989 in Copenhagen by Kim Nekroman after he left the Danish Navy, in which he had been a submarine radio operator for eight years. Deciding to launch a new career in music, he initially played drums in a rockabilly band prior to the foundation of Nekromantix. Learning to play the double bass and to sing, Nekroman set about forming a horror-themed psychobilly band with himself as the frontman. Three decades, multiple line-up changes and nine studio albums later, he continues to carry the Nekromantix flag which still embodies his original vision of monster and horror themes — as well as his signature “Coffinbass” — a self-built double bass with a body in the shape of a coffin and a headstock the shape of a cross.

“It took us 30 years to finally make an official full on live video and audio recording…can’t think of a more thrilling way to celebrate this three decade anniversary, than an immortalized show consisting of songs from our very first album, in 1989, up until today,” Kim Nekroman said in a statement. “What an awesome and horrifying joyride. Now you can watch or re-live the show over and over again from the convenience of your couch.”