The French group Banana Metalik self titled their music "gore'n'roll" and describes it as a mixture of film and music culture. Multiplying tours around the world (Europe, USA, Canada, Japan, Brazil, Russia ....), the group is known for their artistic environment and the infectious energy on stage. "THE GOREFATHER" maxi 6 song EP is their brand new album, a rock'n'roll soundtrack whose class smells like sulfur !. 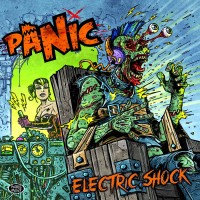